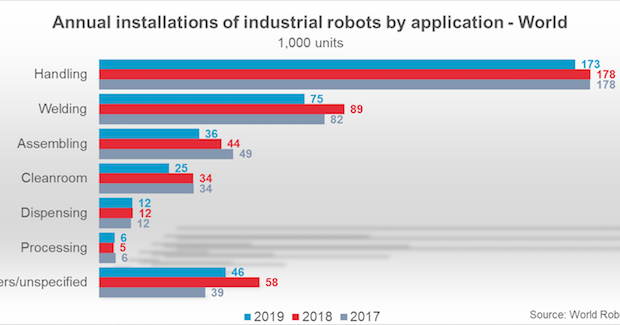 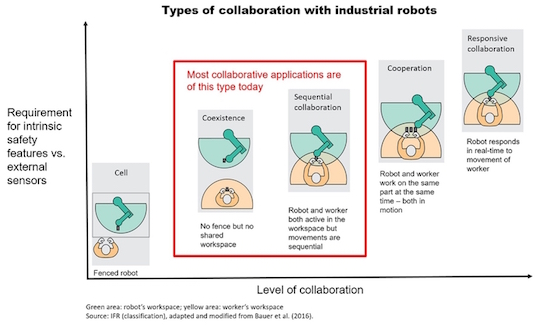 The range of industrial robots continues to expand from traditional caged robots capable of handling all payloads quickly and precisely to collaborative robots (cobots) that work safely alongside humans and are fully integrated into workbenches. Artificial intelligence and machine learning technologies enable robots to sense and respond to their environment.

Q: North American sales of industrial robots and cobots have shown strong growth, and  International Federation for Robotics projections called for 12% growth from 2020 to 2022. What happened?

A: The global robotics market fell in 2019, in part due to weakness in the world’s largest market: China. While North American orders rose 1.6% that year, shipments fell 16% from 2018, which was the all-time record for North American shipments.

North American orders fell 18% in the first half of 2020. While a rebound was expected for the second half, it will likely end up a down year primarily due to the pandemic.

Q: Do you expect cobot sales to increase, decrease, or remain level in 2021?

A: A collaborative robot (cobot) is a type of robot intended to physically interact with humans in a shared workspace. Although they account for less than 5% of the global robotics market, cobot sales have grown steadily and are expected to account for roughly one-third of the robot market by 2027. Their popularity is growing because many cost less than $45,000 and tooling requirements are becoming less onerous.

If the pandemic eases, we expect sales of all types of robots, including cobots, to grow. The pandemic proved robots help create social distancing, allowing manufacturers to safely maintain and even increase production levels with fewer employees on the factory floor.

Q: What innovative solutions are emerging and why are they significant?

A: As more manufacturers seek to streamline operations, they’re developing innovative ways to incorporate cobots for applications including assembly, machine tending, material handling, and welding. Cobots are relatively easy to set up and program, which means in many cases they can be quickly up and running.

These integrations are significant for many reasons. One of the biggest challenges manufacturers face is finding skilled workers. Studies show there will be over 2.5 million unfilled science, technology, engineering and math (STEM) jobs in the next few years; and robots of all kinds will help fill that gap.

Also, it opens up more opportunities for collaboration between human beings and machines. The embedded vision systems that enable cobots to avoid harmful collisions by identifying the presence of an employee are becoming more sophisticated. In addition to identifying a part’s location and orientation to effectively grasp it, the systems enable cobots to inspect finished parts by comparing images against CAD models.

Automation is improving quality of life by making manufacturing jobs less physically stressful, and cobots are helping. Someday, a cobot will be able to sense its human coworker’s behavior within the context of a larger project and adjust its behavior accordingly to complete a task. This will require cobots to be equipped to recognize voice commands or hand gestures, which manufacturers are working on. When systems become sophisticated enough, they’ll vastly improve the profitability of high-mix, low-volume production as employees and cobots collaborate to create individualized products.

Q: Will lead times for taking delivery of a robot or cobot be longer this year than in the past? Will manufacturers source more components in the U.S.?

A: The pandemic has had some negative impacts on deliveries due to the inability to get parts in some cases. Going forward, global robotics companies are rethinking their supply chains. We expect to see more reshoring or near-shoring to North America, but it’s not clear how extensive that will be.

Global companies need to have a balanced supply chain to best serve customers in different areas. Nobody wants to have their entire supply chain in one country when the next pandemic hits. The good news is that automation enables much of this balancing, as companies that want to reshore manufacturing are able to do it in large part because of the productivity created by automation.

Q: What’s the likely impact of the accelerated adoption of robotics and automation on jobs?

A: We expect to see the number of jobs increase, rather than decrease, as more manufacturers automate. Throughout history, technology innovations have always led to more jobs – though often different ones. That’s happening right now with the  emergence of titles, such as “search engine optimization specialist” and “app developer,” that never existed before.

Many of these jobs will be safer, better, and higher-paying. Dull, dirty and dangerous jobs that people don’t want to do and shouldn’t be doing will be replaced by higher-value jobs that allow employees to use their brains, not their brawn.

If you look at the pre-pandemic period in the United States, there were more open jobs than there were people looking for work, and the problem was the mismatch in skills needed versus skills that are available. The shortage of people with STEM skills is expected to worsen over the next several years. To fill that gap, we must do a better job of providing workforce training, offering apprenticeship programs, and using new technologies like virtual reality (VR) and augmented reality (AR).

Companies that successfully automate become more competitive, allowing them to grow their businesses and hire more people. Taken to the national level, countries that invest in automation have stronger economies and more jobs. We must understand that the future is people and machines working together, with an increasing role for people even as the use of automation increases.